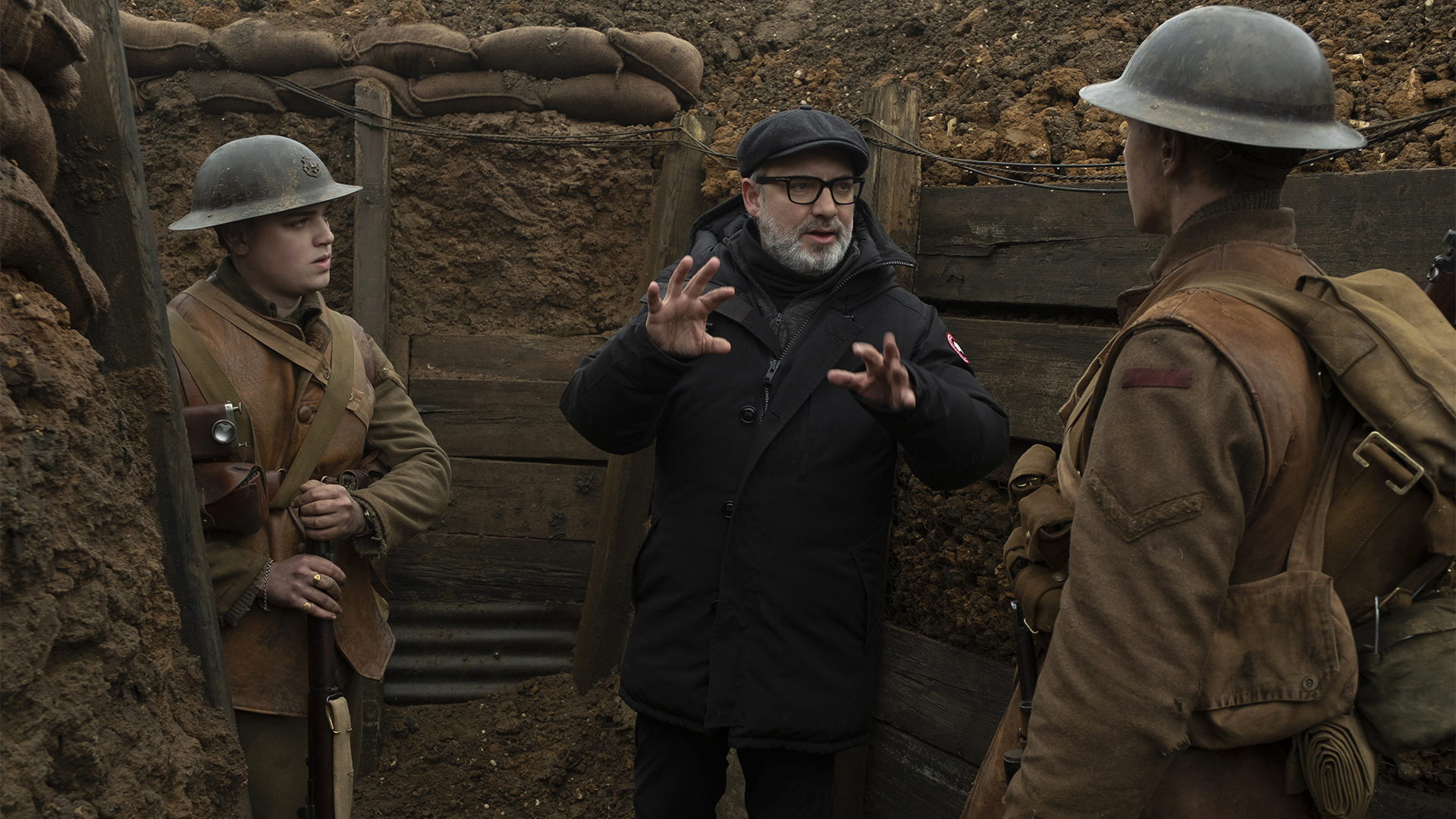 The Film and TV Charity, Entertainment One (eOne), Amblin Partners, Neal Street Productions and New Republic are excited to announce a Royal Film Performance of 1917, directed by Sam Mendes and co-written by Mendes and Krysty Wilson-Cairns. The event, which will be the World Premiere of the film, will take place in London on 4 December.

At the height of the First World War, two young British soldiers, Schofield (Captain Fantastic’s George MacKay) and Blake (Game of Thrones’ Dean-Charles Chapman) are given a seemingly impossible mission. In a race against time, they must cross enemy territory and deliver a message that will stop a deadly attack on hundreds of soldiers—Blake’s own brother among them. 1917 also features Mark Strong, Andrew Scott, Richard Madden, Claire Duburcq, with Colin Firth and Benedict Cumberbatch.

The Royal Film Performance is the flagship fundraiser for The Film and TV Charity, an organisation that supports the tens of thousands of people working behind the scenes in the UK’s world-leading film and television industry.

Sam Mendes, director, producer and co-writer of 1917, said:
"I am delighted that the World Premiere of 1917 will take place in my hometown, London, in aid of The Film and TV Charity. I couldn’t have made the film without the skill and dedication of the many talented craftspeople working in the UK industry—the very people who The Film and TV Charity does so much to support on a daily basis. This film is a hugely personal project for me, and it’s an honour to have it chosen as the 71st Royal Film Performance.”

Alex Pumfrey, CEO of The Film and TV Charity, said:
“It’s fantastic that Sam Mendes, Entertainment One and Amblin Partners have chosen to use the premiere of 1917, filmed in the UK and employing hundreds of highly skilled people in different crafts, to help us shine a light on this extraordinary industry.

“We exist to support the lives and careers of everyone who works behind the scenes in the film and television industry in the UK, without whom we would not be able to tell stories like 1917. When the credits roll and everyone goes home, we’re there, 24/7, helping people to overcome obstacles and reach their potential.

“The funds raised at the Royal Film Performance this year will enable us to develop programmes that improve the mental health support currently available for people within this sector and to run services like our Support Line. We’re incredibly grateful to Entertainment One and Sam Mendes for their support.”

Kezia Williams, Managing Director of Entertainment One UK, said:
“We are delighted that 1917 will debut as the 71st Royal Film Performance and are hugely excited to be hosting the World Premiere in London. It is an honour to have the opportunity to support The Film and TV Charity with their first Royal Film Performance in four years, and we are thrilled to add 1917 to their long list of esteemed films.”

Jeff Small, CEO of Amblin Partners, said:
“We are honoured to support The Film and TV Charity and partner with Entertainment One to present 1917 as the 71st Royal Film Performance. Amblin Partners has a long history of producing film and television in the United Kingdom and the event will showcase not only Sam’s spectacular vision for this story, but also the dedication of thousands of highly skilled workers in the UK, whose commitment ensures that storytelling of this scale makes it to the screen for millions around the world to enjoy.”

The Film and TV Charity was founded as a benevolent fund in the early days of cinema in 1924, six years after the end of the First World War. During nearly a century, the charity has seen huge change within the screen industries and continues to provide financial and emotional support to help with life behind the scenes. Earlier this year The Film and TV Charity launched ground-breaking research to uncover a true picture of the mental health of workers within the sector and is working with the industry to make the UK film and television business a global leader in wellbeing.

1917 will be released beginning 25 December in the US by Universal Pictures continuing around the world in January. The film releases in the UK and Ireland on 10 January 2020. Entertainment One, Universal Pictures and Amblin Partners will distribute the film worldwide.

Tickets for the Royal Film Performance will go on sale at the beginning of November and will be available via www.filmtvcharity.org.uk

About 1917
Sam Mendes, the Oscar-winning director of Skyfall, Spectre and American Beauty, brings his singular vision to his thrilling new epic, 1917.

At the height of the First World War, two young British soldiers, Schofield and Blake are given a seemingly impossible mission. In a race against time, they must cross enemy territory and deliver a message that will stop a deadly attack on hundreds of soldiers—Blake’s own brother among them.

The film is produced by Neal Street Productions for DreamWorks Pictures in association with New Republic Pictures.

About The Film and TV Charity
The Film and TV Charity works behind the scenes of the film, television and cinema industry in the UK. From research to writing, through casting and production, to editing, sales, distribution and exhibition, the organisation supports the lives of everyone involved. If you work in the industry, you can speak to one of their friendly team. Practical and caring, the organisation has an understanding of the day-to-day issues so whether you need a listening ear and or want to talk confidentially on our 24/7 Film and TV Support Line, pick up the phone. Together, we shine a light on the highs and the lows of this extraordinary industry, helping people to smash their career goals and fulfil their potential. #WeAreFilmandTV

The charity recently piloted a free, confidential, independent Film and TV Support Line to provide 24/7 support for everyone working in the industry on issues such as debt, depression and harassment. People can access the service via phone 0800 054 00 00, online chat at www.filmtvcharity.org.uk or by emailing support @filmtvcharity.org.uk

The Film and TV Charity was founded as the Cinematograph Trade Benevolent Fund in 1924 and later became The Cinema and Television Benevolent Fund. Alex Pumfrey was appointed CEO in October 2017 and the organisation and embarked on a bold new mission to extend its reach and impact as The Film and TV Charity. HM Queen Elizabeth II has been Patron of the charity since 1952. Registered Charity No. 1099660

The first Royal Command Film Performance in aid of the charity took place at the Empire Cinema in Leicester Square in 1946 and was attended by King George VI and Queen Elizabeth and Princesses Elizabeth and Margaret. The film shown was the Powell and Pressburger film A Matter of Life and Death starring David Niven.

From 1946 to date The Film and TV Charity has held 70 fundraising Royal Film Performance events.

The Royal Film Performance of Spectre, directed by Sam Mendes, took place in 2015 at the Royal Albert Hall and was attended by TRH The Duke and Duchess of Cambridge and HRH Prince Harry.

About Entertainment One
Entertainment One Ltd. (LSE:ETO) is a global independent studio that specialises in the development, acquisition, production, financing, distribution and sales of entertainment content. The Company’s diversified expertise spans across film, television and music production and sales; family programming, merchandising and licensing; digital content; and live entertainment. Through its global reach and expansive scale, powered by deep local market knowledge, the Company delivers the best content to the world.

Neal Street’s diverse film and television slate includes the hugely successful Call the Midwife for the BBC, which has just finished filming its ninth series; John Logan’s Penny Dreadful and the upcoming Penny Dreadful: City of Angels for Showtime; the award-winning The Hollow Crown for the BBC; two series of Britannia for Sky/Amazon, and the contemporary thriller Informer for BBC/Amazon. Neal Street’s film projects have included Revolutionary Road for Paramount and DreamWorks, Things We Lost in the Fire for DreamWorks, and Jarhead for Universal.

In the theatre, recent productions include Jez Butterworth’s Olivier and Tony award winning The Ferryman, and The Lehman Trilogy which transfers to Broadway in Spring 2020, following a sell-out London run.