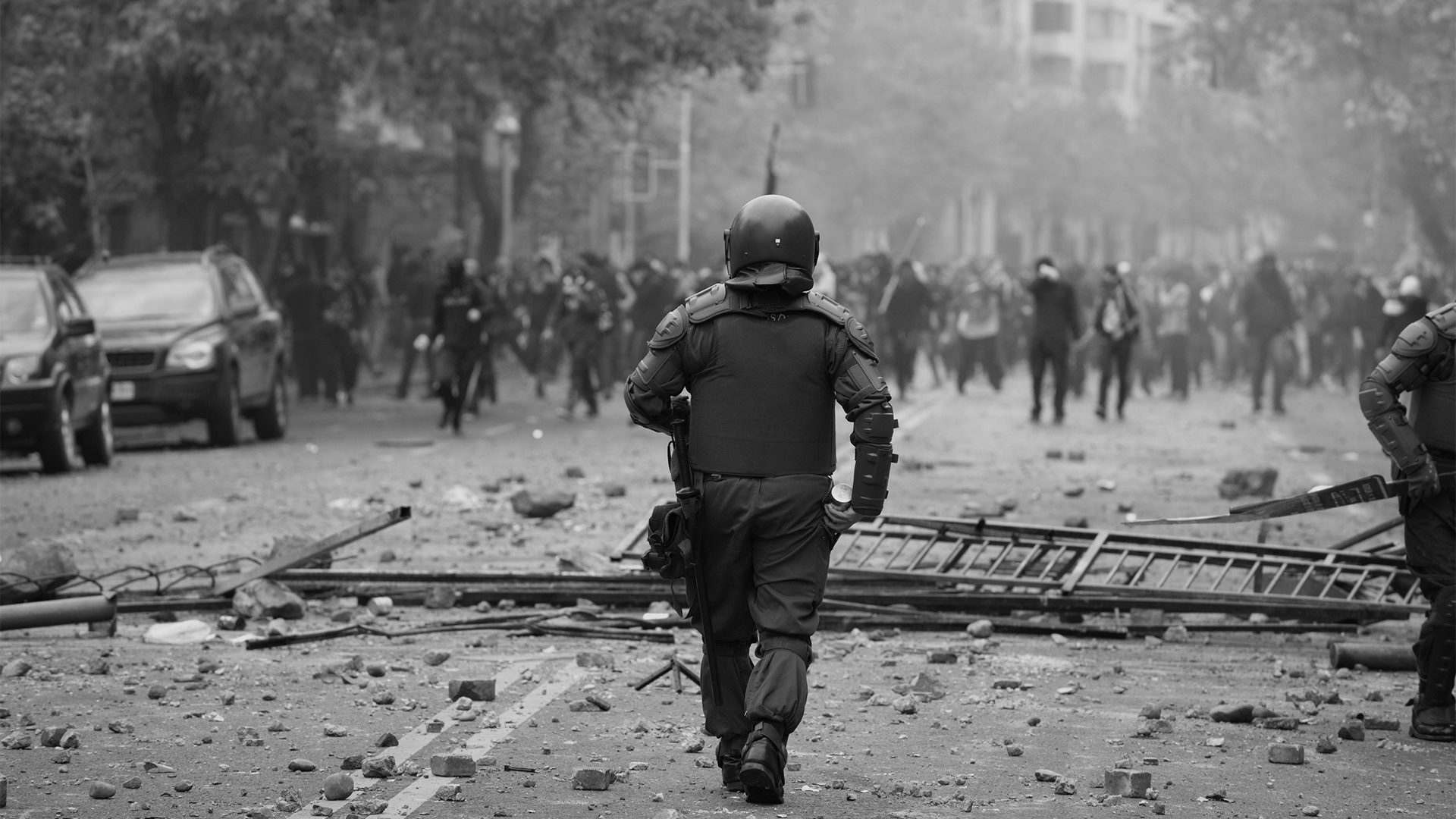 "Why We Hate" Documentary Series Debuts on Discovery October 13

Throughout history, hate and conflict have been part of the human experience. From horrific extremes such as the Holocaust or the Rwandan genocide, when hate has fueled mass destruction, to everyday incidents like playground bullying or malicious trolling on social media, hate shapes our lives in myriad ways. And while all humans have the capacity to hate, few understand what sparks it and transforms it into a destructive force.

Executive produced by filmmaking heavyweights Alex Gibney and Steven Spielberg and directed by Geeta Gandbhir and Sam Pollard (Emmy winners for When The Levees Broke: A Requiem in Four Acts), Why We Hate explores one of humanity’s most primal and destructive emotions – hate. At the heart of this timely series is the notion that if people begin to understand their own minds, they can find ways to work against hate and keep it from spreading.

“The issues explored in Why We Hate are more relevant than ever,” says Nancy Daniels, Chief Brand Officer, Discovery and Factual. “Discovery is tremendously proud to delve into this critical subject with legendary filmmakers Alex Gibney and Steven Spielberg and the teams they have assembled. The hard science gives us the knowledge we need, the storytelling provides the hope.”

State Gibney and Spielberg, "Getting to the root of the human condition is something not only fascinating, but necessary in understanding who we are. This is not a series that just documents something that's happening; it's an inquiry – an attempt to understand why we hate, through the science, and through an understanding of our common humanity. Hate is in our DNA. If we understand why we act the way we do, we can change the way we act. That is what we are uniquely capable of as human beings.”

Drawing on cutting-edge journalism, deep historical investigations and ground-breaking research in psychology, biology, and neuroscience, Why We Hate traces the evolutionary basis of hatred and its powerful impact on individuals and societies throughout human history. The science behind the behavior is a powerful tool to help us understand what drives conflict, enabling people to have real, tough conversations about these issues and behaviors.

Why We Hate works to contextualize the many instances of hate in everyday life: the violent rivalries that erupt at sports matches, the hateful rhetoric that runs rampant on social media, and the heated disagreements that flare up over political partisanship, race, religion, and social beliefs. The series follows brave individuals seeking to quell violent conflict and correct misperceptions, hears from former terrorists and architects of genocide, and allows viewers to consider lessons from some of the most brutal and enduring examples of hate throughout the world.

Among ideas explored include how group-based thinking shapes people’s perceptions and their behaviors. The area that illustrates this the most is sports, where deep loyalties are based on a few different factors such as regional identity. A deep love for one team often leads to a hatred for its rival, which can spill into detesting opposing fans. As Santos explains, “...soccer fans tend to be the most tribal…not just about the soccer players that they care about, but also about the other fans. And that’s interesting because it suggests that it’s not just about the competition.” Santos goes on to draw parallels to today’s political environment: “Political partisanship is getting more and more tribal every day. The distance between the us and them in this country is getting bigger, and it’s developing more of the uglier sides of tribalism.”

Why We Hate also highlights the personal stories of those who have lived a life of hatred, including a lifelong member of a hate group whose childhood memories “are of standing on a picket line telling people they were going to hell.” The series encounters people whose beliefs led them to commit acts of hate so severe they ended up in jail, but who managed, finally, to disengage from those ideologies.

Along the way, Why We Hate reveals contemporary links to ancient and evolutionary behaviors and uses science as a basis for unlocking the truth about hatred and human nature.

Why We Hate will be supported by Discovery Education, the global leader in standards-aligned digital curriculum resources, engaging content, and professional learning for K-12 classrooms. The more than 5 million educators and 51 million students worldwide using the recently launched Discovery Education Experience and other award-winning digital services will shortly receive access to a variety of exclusive Why We Hate videos, classroom activities, lesson plans, a take-home parent viewing guide, and more. Through these thought-provoking resources, teachers, students, and their families will be empowered to explore the human condition for hatred and change the narrative.

About Discovery Channel
Discovery Channel is dedicated to creating the highest quality non-fiction content that informs and entertains its consumers about the world in all its wonder, diversity and amazement. The network, which is distributed to 88.3 million U.S. homes, can be seen in 224 countries and territories, offering a signature mix of compelling, high-end production values and vivid cinematography across genres including, science and technology, exploration, adventure, history and in-depth, behind-the-scenes glimpses at the peoples, places, and organizations that shape and share our world. For more information, please visit www.discovery.com

About Discovery
Discovery, Inc. (Nasdaq: DISCA, DISCB, DISCK) is a global leader in real life entertainment, serving a passionate audience of superfans around the world with content that inspires, informs and entertains. Discovery delivers over 8,000 hours of original programming each year and has category leadership across deeply loved content genres around the world. Available in 220 countries and territories and nearly 50 languages, Discovery is a platform innovator, reaching viewers on all screens, including TV Everywhere products such as the GO portfolio of apps; direct-to-consumer streaming services such as Eurosport Player and MotorTrend OnDemand; digital-first and social content from Group Nine Media and a strategic alliance with PGA TOUR to create the international home of golf. Discovery’s portfolio of premium brands includes Discovery Channel, HGTV, Food Network, TLC, Investigation Discovery, Travel Channel, MotorTrend, Animal Planet, and Science Channel, as well as OWN: Oprah Winfrey Network in the U.S., Discovery Kids in Latin America, and Eurosport, the leading provider of locally relevant, premium sports and Home of the Olympic Games across Europe. For more information, please visit https://corporate.discovery.com/ and follow @DiscoveryIncTV across social platforms.

About Amblin Television
Amblin Television, a long-time leader in quality programming, is a division of Amblin Partners, a content creation company led by Steven Spielberg. Amblin Television’s co-presidents, Darryl Frank and Justin Falvey, oversee all development, production and programming for the company. Amblin Television currently has thirteen projects in various stages of production including Tommy for CBS, a second season of Roswell, New Mexico for TheCW, The Haunting of Bly Manor – the follow-up chapter to The Haunting of Hill House – for Netflix, Halo for Showtime, a straight-to-series order for Brave New World from USA Network, Amazing Stories for Apple, Cortés and Moctezuma for Amazon, Gremlins Secrets of the Mogwai for HBO Max, Animaniacs for Hulu, Resident Alien for SYFY, and the documentary films Natalie Wood: What Remains Behind for HBO and Laurel Canyon for Epix. Some of Amblin Television’s previous credits include the Emmy and Golden Globe Award-winning drama The Americans for FX, Emmy-nominated HBO movie All The Way starring Bryan Cranston, Smash for NBC, Under the Dome for CBS, Falling Skies for TNT, The Borgias and The United States of Tara for Showtime, and Las Vegas for NBC. http://www.amblin.com.

About Jigsaw Productions
Jigsaw Productions is helmed by Academy Award-winning filmmaker Alex Gibney, considered one of the most prolific and thought-provoking documentary filmmakers of our generation. Jigsaw has produced some of the most acclaimed documentary films including Going Clear: Scientology and the Prison of Belief, Oscar-winning Taxi to the Dark Side, Oscar-nominated Enron: The Smartest Guys in the Room, The Armstrong Lie, Client 9: The Rise and Fall of Eliot Spitzer, and Zero Days. Jigsaw's slate of highly visible TV series includes Dirty Money on Netflix, Amazon's The New Yorker Presents, Parched on NatGeo, and CNN's Death Row Stories. Whether the company is creating a documentary or narrative film, a scripted or unscripted series, Jigsaw adheres to a particular ethos: well-told, insightful, scrupulously researched, and visually poignant stories, which ignite and engage our curiosity. Reaching audiences on screens small or large, on platforms digital or traditional, Jigsaw aims to achieve critical and commercial success without sacrificing style or authenticity.

On the feature side, Escape’s credits include The Upside, The Equalizer franchise, Southpaw, Pursuit of Happyness and The Weather Man. On the television side, Escape Artists first straight to series show, Perpetual Grace, LTD., premiered on June 2nd on EPIX. Next up on the Escape Artists’ roster is Servant for Apple TV+ with Executive Producer M. Night Shyamalan and Troop Zero with Amazon Studios.